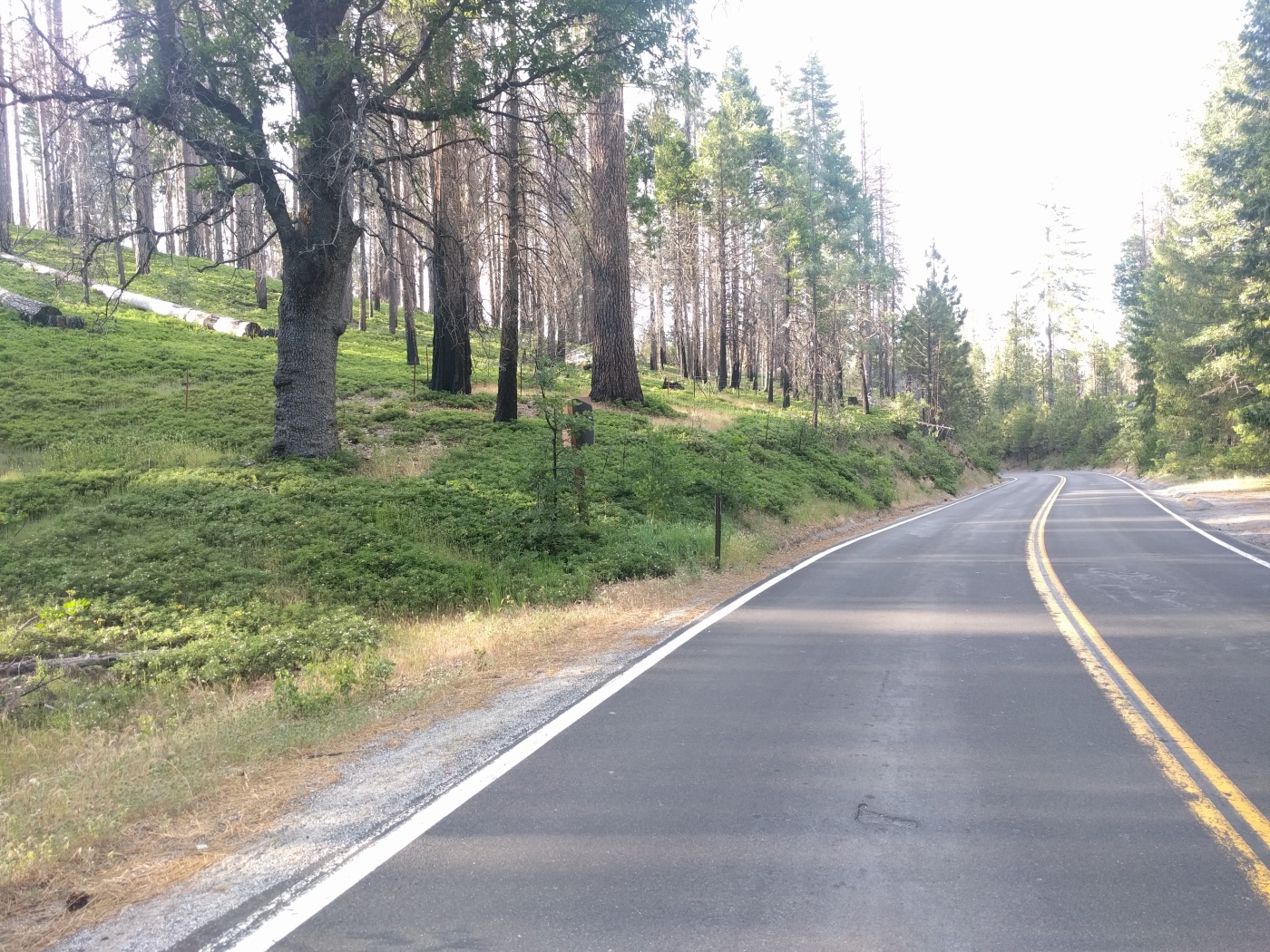 I awoke the next morning to the sound of the bubbling brook nearby, packed my tent, and waded back across the river to Canary Lane. I walked back to Rt 49 and… I was at a terrible hitchhiking spot. Bottom of hill, cars whizzing by, super narrow road. I started walking south, looking for a pull-out or wide shoulder to hitch from. It was 11am and already about 90 degrees when I finally reached a decent pull-out. I dropped my bag, stuck out my thumb, and ignored the stares from the trailer park across the street.

Twenty minutes went by before a pickup truck pulled a U-turn into the pullout. They had passed me but decided to come back. It was a young and heavily tattooed couple taking up both seats in the pickup, but they offered to let me lay down in back, as long as I stayed down to avoid detection from police. In California you’ll get a hefty fine for riding in the back of a pickup. So I climbed in and watched the telephone wires until I felt the truck come to a stop and heard the doors pop open. I popped my head up and Tattooed Guy gave me the all-clear to climb out of the truck. We were in the back of a parking lot for a Staples or something. I thanked them and walked a couple minutes to the nearby intersection where 49 turned.

At the intersection, there was a traffic light and a sign indicating that Route 49 took a left turn. I stood next to the turning lane and thumbed for about 10 red light cycles, but I grew restless and took the left turn on foot, beginning to walk south on 49 again. I had gone no more than 50 meters before a car pulled up and I hopped in with a middle-aged woman. “I’d let you sit in front but I got my cat up here!” She had her cat crate in the front seat. The little kitty was just coming back from surgery at the vet. She was my favorite kind of California person. Used to run a vineyard with her husband, spiritual and outdoorsy, supportive of local businesses, enjoys marijuana with her husband, etc.

She dropped me in a crunchy little village called Mokelumne Hill, but not before giving me a quick tour of the village. Buildings dating back to the Gold Rush had been converted to art galleries and cute restaurants where you imagine the wine grows right from the grapevines that hang over the terrace. There were signs advertising the town’s 4th of July fireworks.

I stood at the intersection and chanced up on a roadside tree with berries. They looked like cherries. I tasted one, ready to spit it out. It tasted like a plum. It was a cherry plum tree. I feasted, filled two Ziploc bags and returned to the road to hitch.

Soon a middle-aged man in a pickup picked me up. He seemed cool enough until he asked me who provided my utilities back in Boston. He started rambling about the cost of utilities and the housing crisis in California, and of course he offered half-baked diagnoses of the nation’s economic woes. I got a bit of a Fox News vibe from him and was glad to be dropped eventually in Calaveras County.

I was getting close to Yosemite. Calaveras County, by the way, was the setting for a famous Mark Twain story about a frog or something, so there are images of frogs everywhere you look. 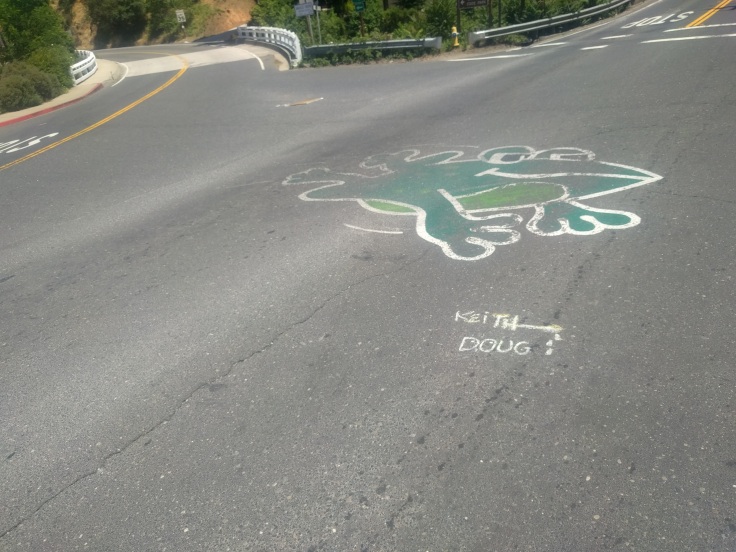 I was picked up by a Prius driven by a male nurse from Tennessee. He was on speakerphone with his girlfriend. I listened awkwardly to their conversation for 10-20 minutes as the call failed, they interrupted each other, asked each other to repeat things, and generally just had awkward conversation that could only result from a long-distance relationship. The girlfriend said very little. “Yeah.” “Mmhm.” “What?” “WHAT?” This was followed by a frustrated sigh coming through the speaker, and Male Nurse apologizing and pleading with her to not get mad. I watched the countryside and thought how lucky I was to have free entertainment to go with my free ride.

Male Nurse dropped me at the Intersection of 49 and 108. It was 3pm, hot as fuck, and there was no shade. Mercifully, I was quickly picked up — again by someone who pulled a u-turn after initially cruising past me. Super nice guy, late 20s, with a 2-year-old daughter in the backseat. This was definitely more awkward than the last ride, and the Guy was locked in a battle of willpower with his infant daughter. She wanted her dragon. He reached back to the floor and fetched her dragon, which was a toy dinosaur. Then she didn’t want it. She wanted him to talk. “Talk to me, Daddy!” She wanted water. He handed her a nearly empty water bottle. “But there’s no water, Daddy!” Clearly there was water in the bottle. There wasn’t much. But the girl weighed 30 pounds. Drink the damn water.

The Guy was curious about my story, but after about 10 minutes of being interrupted by his daughter, we stopped trying to converse. By the end of the ride he seemed about 5 years older. He took me up into the foothills and dropped me in Groveland, the last major town before the Yosemite entrance gate.

In Groveland, I was about 20 miles from Yosemite’s entrance at Big Oak Flat. I walked up the road a few hundred yards to escape the slow traffic of the town. Moments later, a late model Mercedez S-class pulled up in front of me. I hopped in next to Xander, a guy my age who was visiting from New York City to hang with some friends in San Francisco and with his friend who is now a Yosemite Park ranger. Well, Xander and I cruised around scenic S-turns with majestic pine trees rising beside us. Neither of us had been to Yosemite before. Xander offered me a hit from his bowl, and I graciously accepted. A celebration was in order. We were stoned and we were excited in our own way to reach Yosemite. Half an hour later, we reached the gate, and I bade Xander farewell as he paid the entrance fee and drove through to his campsite.

I camped out on the side of the road that night. All campsites were full at Yosemite. I already knew this. The next morning I planned to enter the Park on foot. As it turns out, there was one more incredible ride I was about to hitch.

TOMORROW: Inside Yosemite. Some stories and history you won’t hear anywhere else.