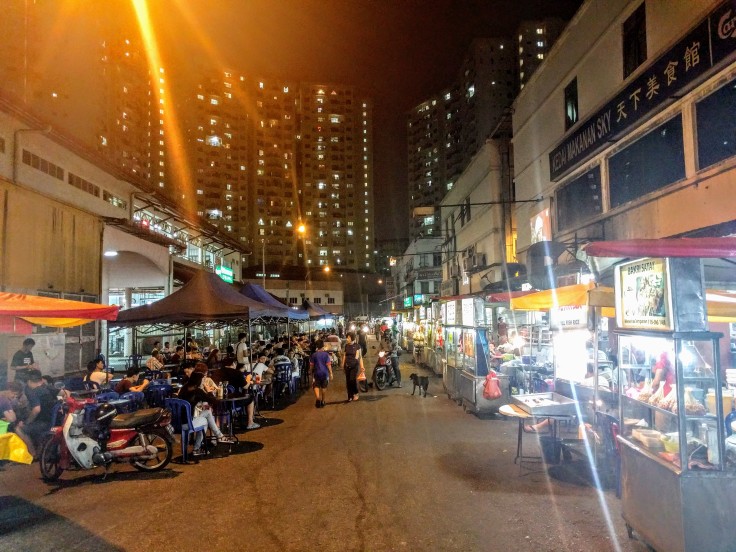 On March 10, 2016, I flew from Boston to Singapore to begin a backpacking trip through southeast Asia. In my first week I experienced two interesting situations. This is the story of the first one:

On the 2nd day of my trip, I took a bus from Singapore up to Kuala Lumpur, the capital of Malaysia. Nervous and struggling through 110F heat, I was relieved to make it to the rendezvous point where I was to meet my Couchsurfing host, Theodore (name changed). Theo pulled up in his sedan, I hopped in, and we zoomed off into Kuala Lumpur traffic.

Um, what is couchsurfing? Couchsurfing.com is an international website connecting travelers with hosts willing to offer a couch or other sleeping surface. You get a free place to stay, but often the expectation is that you will spend time with the host.

This would be my first Couchsurfing experience, but Theo and I had messaged back and forth, and he seemed like a nice guy, if a bit overeager to host me. He was my age (26 at the time) and shared a highrise apartment with 3 roommates. It sounded fun.

There was a body pillow dissecting the bed dow, ostensibly so that we would each have half of the bed. I was a little unnerved, but I didn’t want to offend him, and I quickly said that the bed would be fine. And it was my second day in Asia, so I assumed this was normal. Something that was definitely NOT normal, however, were the walls of Theo’s room. Nearly every inch of all 4 walls were covered in full-size 8.5×11 printouts of photos. Every photo, without fail, was a picture of of Theo posing with someone. I questioned him about it, and he confirmed that these were his Couchsurfing guests. Several years worth.

At this point, I just chalked it up to Theo being a quirky guy. He had over 150 positive reviews on Couchsurfing, after all, and only 2 negative ones. As I continued to scan the photos on the walls, though, I had a feeling that there was something… off. Certainly he had an obsession with selfies, but there was something about the people in the pictures. But I couldn’t put my finger on it, and we went off to get dinner with Theo’s roommate and I thought nothing more of it for the time being.

I had committed to 2 nights at Theo’s, in spite of the fact that Theo had pleaded with me to stay longer even before I had left Boston. The first night was fine. We had an early night and I slept comfortably on my half of the bed.

On the second night, things got a little strange. We were playing cards in the living room with Theo and his 3 roommates. Out of the blue, one his roommates asked me, “Do you like homosexuals?” I replied that yes, I had gay friends in America and joked that it meant more women for me. He did not laugh. “In Malaysia, we do not like homosexuals.” I can’t recall exactly what was said next. But I remember the conversation ended quickly and we continued playing cards. I do remember glancing over at Theo, but he didn’t look up from his cards.

So that night, Theo and I were preparing to go to sleep, and he tried to have sex with me. At first it was a bizarre suggestion he made: “Tom, the air conditioner is very loud next to me, so I might have to sleep on your side of the bed.” I thought he might be joking, and I laughed it off. Some minutes later, we are lying down in bed with the lights still on, and Theo turns towards me, smiles at me, and slowly reaches out and pokes me, with his index finger, on my buttcheek. OK, now I knew the deal. But I didn’t know what to do, so I forced a chuckle, as if the butt poking game was a familiar joke. I got up and said I was ready for bed, turned the light off, and used the bathroom. When I came back to lie down in bed, Theo stuck his arm out just as I was reclining, and I dodged his attempt by quickly moving to the far outside of the bed.

I didn’t sleep well that night. I wasn’t sure if Theo’s attempts would escalate. I wasn’t scared, but I was uncomfortable, and I felt a pang of White Male Cis Guilt at being uncomfortable. It was not the first time I’ve been hit on by a gay man. But it was the first time I was hit on by a gay man while in his bed as a guest at his house. Adding to my discomfort was the knowledge that homosexuality is illegal in Malaysia and punishable by up to 20 years in prison.

I awoke in the morning and was relieved to have a bus to catch. Theo had previously offered me a ride to the bus station. His demeanor had changed dramatically this morning though. His previously goofy and talkative demeanor had turned to a coolness marked by one-word responses.

Before I left, I asked Theo if he wanted to take a selfie with me for his wall. He declined at first. Surprising, considering I had been totally nice to him all weekend and I couldn’t imagine the 100s of people on his walls were much nicer than me. Eventually, we took the selfie. As I left, I inspected the selfie walls one more time and realized that about 95% of his selfies were with men – men that tended to have a similar bone structure and look about them – men that were, objectively, just really really handsome dudes.

I’ve since talked to other backpackers about their experiences with Couchsurfing. I would say 90% of the women have reported unwanted sexual advances from their Couchsurfing host.

A couple days later, I went on Couchsurfing.com and left Theo and positive review. I described him, accurately, as a very attentive and affectionate host. I did not mention the bed incident. I also noticed on his site profile that he lists the sleeping surface as “Shared Surface” or “Floor”. So I cannot blame him for misleading me, although as a first time user of Couchsurfing.com, I would recommend that the site designers make this detail slightly more prominent on the profile page.

Ultimately, the Malaysian government should be ashamed of themselves for their anti-gay laws. No person as friendly and warm-hearted as Theo should have to live in fear of their own sexual practices with other consenting adults. He should be able to say, “Hey Tom, wanna get down?”, rather than spend 48 hours coaxing me into his apartment under false pretenses.

It’s time to bring Grindr to Malaysia, and to the rest of the world. Get with the times, bitches.