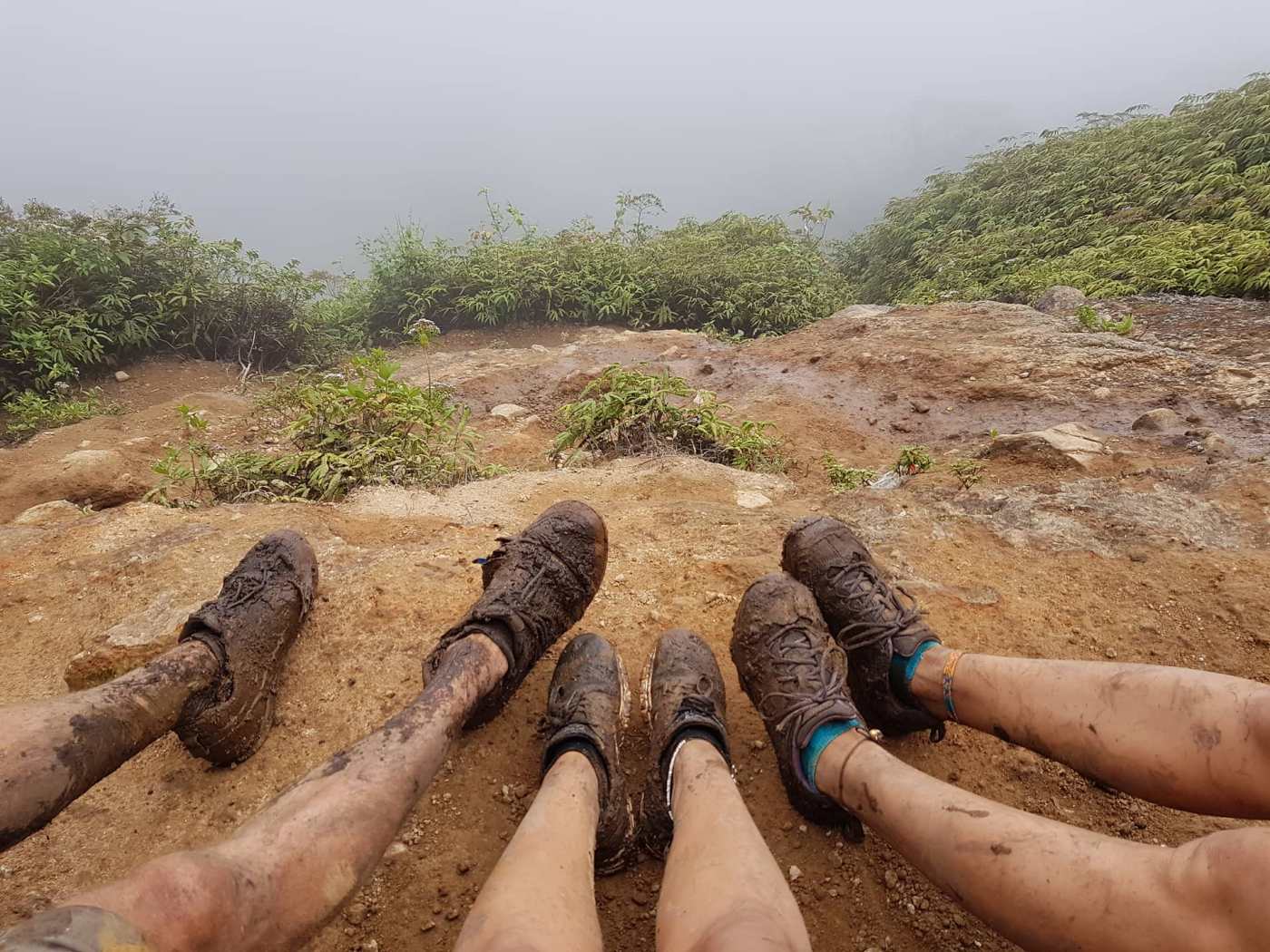 Having already hiked Maderas solo, I later met two beautiful women, a Bolivian and a German, at the nearby hostel, El Pital (the Chocolate Factory), and I offered to guide them up the Volcán. It proved more adventurous than expected.

The next day we set off from the Madrugaba Farm entrance. A guard stopped us to collect the $2 entrance fee and inform us that hiring a guide was required. Me and the Bolivian talked our way through. “I’m a guide in the US,” I said. “And I hiked the volcano last week without a guide.” That worked. I was handed some paperwork and signed it, presumably assuming liability for the hikers in the group.

We hiked fast, soon reaching the mirador with a view of the island’s hourglass stretching towards Volcán Concepción. Ascending we reached a cloud forest zone and our pace slowed, as the trail turned to ankle-deep mud. A nice contrast to the dry season throughout the rest of the island in March.

Near the top, I led us up a wrong a turn (towards the summit mirador, not the lagoon). A cellphone materialized from the German’s pocket, and Maps.me quickly proved my incompetence (I’m not against maps; I simply don’t have a phone right now, which I describe here as a mindfuck) and they certainly don’t hand out trail maps for Maderas). But yes, German girl had a phone with the all-knowing Maps.me.  The Bolivian girl was initially annoyed to have taken a wrong turn but was soon overjoyed to make fun of my sudden transformation from confident sexy jungle man to humble apologetic nerd with slightly less value than an iPhone.

We backtracked to the trail intersection and laughed at our mistake, as by now the clouds had cleared and, looking below to our left, we could see the lagoon shimmering in the sun.

We descended; I dipped in the water; and, as planned, I left alone to descend the volcano quickly in order to return for my 4pm yoga class. I would say I ran down the mountain, but the correct term is “controlled falling.” It was an hour-long controlled fall. It was mentally taxing, focusing on the trail so intently. But I allowed myself several breaks to smoke hash (pain reliever, fun enhancer); to sit and absorb my surroundings (after falling on my ass); and finally to stop at the mirador, gaze out at Concepción, catch my breath, and smoke a little more hash. For this style of descent (running down a volcano), I recommend grabbing nearby trees and, if it’s in your wheelhouse, swinging yourself down Tarzan-style, lightening your footsteps and alleviating pounding on the legs.

I continued downward and obviously took another wrong turn as I suddenly emerged from the forest to a beautiful plateau, a dry golden meadow dotted with clumps of tall green grass and cococnut palms. The plateau gently sloped downward, toward Volcán Concepción, and generally in the direction of Zopilote Farm, where I needed to go..

Fuck. Should I backtrack and find the official trail back to the Madrugaba entrance? Nah. How could I get lost from here? It’s all downhill, and eventually, even if I miss Zopilote, I will hit the ring road, which surrounds the entire volcano.

So down the hot meadow I stumbled, dumbly staring up at Concepción. I quickly came to a property and followed the cowfence downhill.

A group of cows soon blocked my path. I slowed to calm pace one might expect of an Ometepe farmer. As I passed, I realized I had positioned the cows between myself and the fence. If you’ve ever put yourself between a cow / goat / horse and a cliff, as I have in India, you know how fearful the animal can become. This was just a fence, but I was an unexpected Gringo guest amongst this herd, and I sensed their discomfort. As I neared  the cows eyed me warily. Some shuffled to their feet, turning away from me, except for a bull, the largest bull, who turned to face me directly, stomping his feet just loudly enough to stir something in my memory — the image of a bullfight on TV, with the bull squaring up towards the fighter, the bull stomping his feet and nodding his horns ominously. “Eyyyyy,” I cooed. “Que paso amigos?” The big bull, of course, watched me pass in peace. I resumed my breakneck pace downhill.

I followed the cow fence and eventually was forced to turn right onto local trails, hopping over rocks and ducking under banana leaves. I came to a house and cut through to the front with a dirt road. Walking to the right, 2 minutes later, I came to the main road, and before me stood the entrance to El Pital (the Chocolate Factory), the hostel where the Bolivian and German girls were staying — and a mere 10 minute walk from my yoga class at Zopilote.

Strangely enough, the girls later told me that they descended Maderas later that day and emerged from the woods at the exact same spot: the entrance to their hostel.

If I were you, I certainly wouldn’t bother with the bullshit of the Madrugabas entrance. I would find your own trail. But of course, if you ask a local, they will tell you a story about an American who died on Maderas (“just 6 weeks ago”; “just 2 years ago”; “about 7 years ago”). Always this story. This scare tactic. If you are a Central American working in touristm and you’re reading this, please do us a favor and shut the fuck up. Or at least get your facts straight.

I support the local economies wherever I travel, but having to pay $30 usd for a guide up a mild 5km hike is patently absurd. I do this shit EVERY OTHER DAY. I am a hiker and backpacker. I’m not on vacation. This is my life. I don’t expect you to come to Boston to hike Blue Hills and pay for a guide — I tell to you bring water, fruit, and a rainjacket.

I will continue to circumvent these laws, just like I ignore marijuana prohibition laws because they are born out of racism, greed of pharmaceutical companies, and greed of corrupt drug-dealing, arms-dealing governments like that of the US.

Drugs. Indeed! Yes, there is an epidemic in the hiking community of Central America. The epidemic of required guides. It is a disease that breeds incompetence and discourages adventure, learning experiences, and opportunities to gain self-sufficiency in the mountains.

I live on $400/month, or less when volunteering, and I just hiked 4 volcanoes in 2 weeks. Paying the Guide every time would hit my wallet like a drug addiction.

There is another volunteer at Zopilote, an Argentinian guy, who was robbed and is traveling with no money whatsoever. So imagine our predicament when we went to hike Concepción, only to be demanded of $34 usd to use the trail. This was my next hike. Of course, we could not pay, but we needed to climb the volcano regardless (Tengo GANAS, Diego!”). This will be my next story for you; bushwacking Volcán Concepcíon. Adventure will ensure.